As party-list Congressman Lito Atienza reminded his colleagues in Congress recently, he, as the Secretary of the Dept.

of Environment and National Resources (DENR) in 2009 ordered the two water firms to pay a fine of P 29.4 Million for the period of May 7 to Sept. 30, 2009 and P 200,000.00 per day thereafter for violating RA 9275 which “requires the MWSS and the two concessionaires to provide wastewater treatment facilities and to connect sewage lines in all establishments, including households, to an available sewerage system within five years upon the effectivity of RA 9275 on March 6, 2004.”

And this year, on August 6, ten years after the initial order of the DENR Secretary, the Supreme Court upheld the ruling of the Court of Appeals and orders these companies to pay to pay billions of pesos, including a daily incremental fine until full compliance with the law. The two firms announced immediately that they would file motions for consideration.

Manila Water even had the audacity to warn the Supreme Court that Metro Manilans will suffer an exponential 780% increase in water rates or as much as P26.70 per cubic meter if the Supreme Court  does not reverse its decision!

More importantly, the ICC stated that Manila Water is “a public utility and therefore cannot pass on its corporate income tax to consumers”.

In 2015, the two water companies filed separate suits against the government at the Singapore unit of the Hague-based Permanent Court of Arbitration. For some mysterious reasons, the cases were kept secret. The two tribunals gave their decisions in July 2017 and November 2018, but nobody knew about it except for the particular parties concerned. The public was not aware of it.

ACE UP THEIR SLEEVE

And from seemingly out of nowhere, amidst the Supreme Court order for Manila Water and Maynilad to pay billions of pesos, the Filipino people was awaken with the news that an international tribunal has ordered the Philippine government to pay ₱7.39 billion to Manila Water and  ₱3.4 billion to  Maynilad’s for their alleged losses due to MWSS’s actions.

Since 2017/18, Maynilad and Manila Water had an ace up their sleeve in their legal battle with the government/ DENR. Perhaps it was to be used during the Supreme Court motion for reconsideration. Fortunately for the public, Manila Water, a publicly listed company, submitted the document to the Security and Exchange Corporation as part of its reportorial commitments. And the SEC people immediately reported it to their superiors and was soon disseminated through the media.

Perhaps taken aback by the Singapore Tribunals’ multi-billion-peso awards to the two water firms, President Duterte declared that the government would not pay, and threatened to file graft and plunder charges  as well as economic sabotage against the firms’ owners.  He even warned of total expropriation of the two companies. 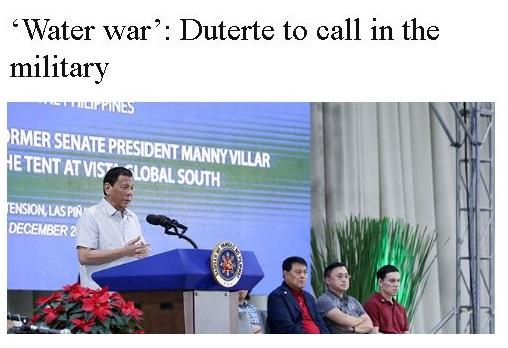 The President called their bluff, so now both companies backed down and announced that they would just waive the amount awarded to them by the Singapore arbitration tribunals.

UNFAVORABLE TO THE PEOPLE

While these two water firms have contracts with the government to provide “potable drinking water” to the consumers, a great majority of Metro Manila residents would rather buy bottled water than drink tap water and risk probable diseases. Before the privatization of MWSS and the advent of Manila Water and Maynilad, most people in Metro Manila drank water from the tap. There was hardly a market for bottled water or water-bottling stations then. Now, practically every neighborhood has one or more water-refilling stations.

One of the reasons for the privatization of MWSS was inefficient service. It took the private water firms about a decade to give the residents good enough water pressure such that they wouldn’t need to use water pumps and tanks. But the Manila Water crisis of March-April 2019 showed all and sundry the gross inefficiency and incompetence of Manila Water. Of course, MW managers blame many things, except themselves, for the water crisis.

The provisions of the concessionaire’s agreements are burdensome to Filipino taxpayers. The companies are “guaranteed profits”! This is nothing but sovereign guarantee. The government is in effect forbidden to interfere in the pricing of water.

While MWSS sets the basic tariff rates every five years in the so-called rate-rebasing procedures, the water firms can go to a 3-man panel whose members are each nominated by the water company, MWSS and the International Chamber of Commerce. Since the ICC representative is a foreigner, the two water companies, which are multi-national corporations, always nominate foreigners. The foreigners then easily out-vote the MWSS nominee.

Both water firms are supposed to be Filipino companies, serving a Filipino community. Why do they have to go to a tribunal composed mostly of foreigners?  Both Manila Water and Maynilad have huge foreign shareholders, more than 40% in the case of MW and as some allege, the majority in Maynilad, which is ultimately owned by the Pilipinas Pacific Enterprise Holdings Inc, the owner of the First

Pacific holdings in the Philippines. Mr. Manuel V. Pagilinan owns ONE share of the one million and 4 shares of the Pilipinas Enterprise Management Holdings Inc.

Also. public utilities must be Filipino-owned or owned by a company that has 60 % shares held by Filipinos.

We must ensure that our public utilities be Filipino-owned. The real ownership of a company can be concealed through layers of legal technicalities. The SEC should be held liable if public utilities are found to have more than 40%  their shares held by foreign entities.

Any arbitration between the companies and the government must be done under the jurisdiction of the MWSS Board of Trustees or the Philippine courts, but not under the Hague-based Permanent Court of Arbitration or any foreign tribunals.

The MWSS should be re-classified as a regulating government agency and not as a public utility. Consequently, its functions have to be changed.

And, there must be an investigation on why there was complete secrecy in the cases filed by the water firms against the government at the Singapore arbitration tribunal from 2015 up to just recently.

The water crisis in March to April of this year which saw tens of thousands of households without water and the SC judgement confirming the water firms failure to put up enough water treatment facilities and to connect sewage lines of households and establishments are proofs that the water companies are not doing their jobs well.

United Nations General Assembly Resolution 64/292 recognized the human right to water and sanitation. The UN Economic and Social Council General Comment No. 15 (2002) states in its Article 1: “Water is a limited natural resource and a public good fundamental for life and health. The human right to water is indispensable for leading a life in human dignity. It is a prerequisite for the realization of other human rights.”

The human right to water, which is “a prerequisite for the realization of other human rights,” cannot be simply left in the hands of private companies whose sole desire is to make profits. While private entities can be in the business of water distribution, they should be regulated by a proper government agency. This is not a partisan question, this is an issue dealing with a basic human right.

THUS,  the Filipino people need to protect their human right to water and sanitation; and, support the President of the Republic in his confrontation against the two water firms, which are owned by multinational conglomerates.