Here is a newspaper article I wrote on the Torogan, the Mranao royal house. I had posted this before in my websites and in my blogs. I stopped maintaining my websites while some of my blogs just vanished for whatever reasons.

This is a snapshot of my lost blog with its Torogan post:

This is our clan’s “Torogan” or royal house. Built around 1740, this Torogan witnessed a long history of Marawi – the glorious and the inglorious. The Torogan was the center

of activity in 1891 and 1895 when the people of Marawi led by the legendary Datu Amai Pakpak defended the territory against invading Spaniards. It witnessed the coming of the Americans and the resistance put up by various groups, datuships and sultanates. It was also a venue for the signing of the Dansalan Declaration in 1935 which asked the US government NOT to include the Moro Nation (Bangsa Moro), esp. Lanao, in its grant of independence to the Philippine Islands.

In happier times, it witnessed the grand celebration of – including the firing of cannons (lantakas) for – my father’s (Macapanton H. Abbas’s) passing the Bar exams in 1935, the very first Moro to do so. It was also the venue of what the old folks considered the ‘Moro wedding of the 20th century’, the union of the children of Lanao’s first congressman Sultan Ibra Gundarangin and Cotabato’s first senator, Datu Sinsuat Balabaran.

And in 2017, it witnessed the inglorious destruction of Marawi by the Philippine government.

Sadly, the answer to my question at the end of the article is that it is the former, not the latter. 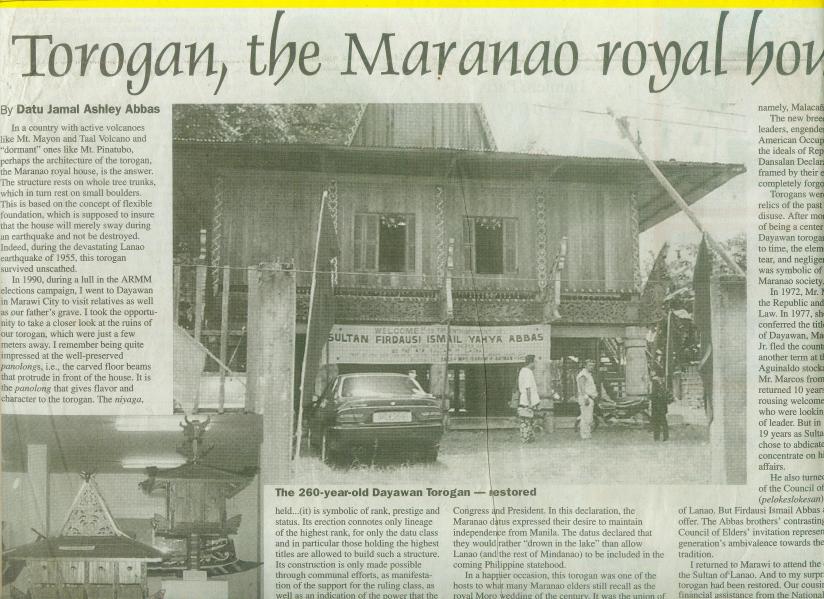 In a country with active volcanoes like Mt. Mayon and Taal volcano and “dormant” ones like Mt. Pinatubo, perhaps the architecture of the torogan, the Maranao royal house, is the answer. The structure rests on whole tree trunks, which in turn rest on small boulders. This is based on the concept of flexible foundation, which is supposed to insure that the house will merely sway during an earthquake and not be destroyed. Indeed, during the devastating Lanao earthquake of 1955, this torogan survived unscathed.

In 1990, during a lull in the ARMM elections campaign, I went to Dayawan in Marawi City to visit relatives as well as our father’s grave. I took the opportunity to take a closer look at the ruins of our torogan, which were just a few meters away. I remember being quite impressed at the well-preserved panolong‘s, i.e., the carved floor beams that protrude in front of the house. It is the panolong that gives flavor and character to the torogan. The niyaga, which according to ethnology/sociology experts is actually the highly stylized or metaphysical form of the Sarimanok, is carved on the panolong. It is also quite amazing that this torogan was built without using a single nail.

In a scholarly essay (Asian Studies 1968), David Baradas described the Torogan as ” the ancestral home of the highest title holder of the major descent line within a community. It is a multi-family dwelling…(where) big ceremonies are celebrated and held…(it) is symbolic of rank, prestige and status. Its erection connotes only lineage of the highest rank, for only the datu class and in particular those holding the highest titles are allowed to build such a structure. Its construction is only made possible through communal efforts, as manifestation of the support for the ruling class, as well as an indication of the power that the ruling body wields within a particular area….”

Our torogan was first built some 260 years ago with the founding of the agama (community) of Dayawan and the installation of the first Sultan of Dayawan. The prestige of this royal house has grown beyond the boundaries of the community. Together with the royal houses of Marawi, Marantao, Guimba, and Madaya, Dayawan is a “keeper” of the House of Lanao. This means that the Sultan of Lanao must belong to the major descent lines of these communities.

Members of this historical royal house led the defense of Marawi against the Spanish in 1891 and 1895. During the American Occupation, Dayawan was very active. In 1935, it was one of the royal houses that hosted the signing of the so-called Dansalan or Marawi Declaration, which was submitted to the US Congress and President. In this declaration, the Maranao datus expressed their desire to maintain independence from Manila. The datus declared that they would rather “drown in the lake” than allow Lanao (and the rest of Mindanao) to be included in the coming Philippine statehood.

In a happier occasion, this torogan was one of the hosts to what many Maranao elders still recall as the royal Moro wedding of the century. It was the union of Raga sa Kampong and Datu Duma Sinsuat. She was the daughter of the Sultan of Lanao, Congressman Datu Ibra Gundarangin while he was the son of Senator Datu Sinsuat Balabaran of Cotabato. A high point of the celebration was the Maranao royal game of sipa manggis, a colorful and graceful version of the Tagalog game of sipa. The grand prize was the hand of a Maranao princess in marriage.

Some twenty years later, the ties between these Maranao and Maguindanaon branches of the House of Dayawan/Marawi were further strengthened by the union of Judge Datu Macapanton Abbas’s daughter and Congressman Datu Duma Sinsuat’s son (Abbas and Sinsuat were second cousins). Interestingly, the venue of this grand Moro wedding was neither in Lanao nor in Cotabato. It was held in far-away Manila Hotel with then VP Fernando Lopez heading the list of sponsors. It was a clear sign of the times — the center of power in the new Republic was Manila. In the Philippine Republic, there was place for only one “torogan”; namely, Malacañang.

The new breed of Moro leaders, engendered by the American Occupation, embraced the ideals of Republicanism. The Dansalan Declaration of 1935, framed by their elders, was completely forgotten.

Torogan‘s were now considered relics of the past and fell into disuse. After more than 200 years of being a center of power, the Dayawan torogan finally gave in to time, the elements, wear and tear, and negligence. Perhaps it was symbolic of the decay of the Maranao society.

In 1972, Mr. Marcos abolished the Republic and imposed Martial Law. In 1977, shortly after being conferred the title/rank of Sultan of Dayawan, Macapanton Abbas, Jr. fled the country to avoid another term at the Camp Aguinaldo stockade and to fight Mr. Marcos from abroad. He returned 10 years later to a rousing welcome from Moros who were looking for a new kind of leader. But in 1996, after about 19 years as Sultan of Dayawan, he chose to abdicate in order to concentrate on his business affairs.

He also turned down the offer of the Council of Elders (pelokeslokesan) to be the Sultan of Lanao. But Firdausi Ismail Abbas accepted the offer. The Abbas brothers’ contrasting responses to the Council of Elders’ invitation represents their generation’s ambivalence towards the role of Moro tradition.

I returned to Marawi to attend the enthronement of the Sultan of Lanao. And to my surprise, the Dayawan torogan had been restored. Our cousins had asked for financial assistance from the National Commission on Culture and the Arts (NCCA) through the Mindanao State University. It was indeed a welcome sight and experience. However, the fact that it was funded not by the community but by a government organization does not seem to be a good augury for the Maranao society. In fact, the torogan was passed off as an historical (read: dead) monument not as a living, working institution.

But in May 1996, the torogan of our forefathers was once again a living symbol as the day of the enthronement of the Sultan of Lanao began with breakfast and prayers for the Sultan and the Maranao people in this 260-year old royal house.

The state of the Dayawan torogan seems to reflect the vicissitudes of the Maranao society. Will it be turned into a museum that would tell tales about past glory and cater to alien tourists; or, will it be transformed into a living and dynamic symbol of Mranao culture, history and leadership that would inspire the Moro people?

Torogan, the Maranao Royal House was published in The Philippine Post on Oct. 6, 1999