Yesterday, with typhoon Ompong (Mangkhut) wrecking havoc in the northern parts of the island (Luzon), and after a 12-hour blackout, I just turned on the TV and looked for a nice movie to watch on cable TV.

One channel was showing Stardust (2007) and I decided it was just the right film to watch — light, funny, nostalgic and with beautiful stars in it. I remember admiring Michelle Pfeiffer when I first saw that film. While she was already 49 years old then, she was as beautiful as ever in the movie.

I saw the film when it was first shown in theaters and I even wrote a review of it in my column, QUANTUM CINEMA, in Mr. & Ms. magazine. For those who would want to watch the film on cable or DVD, you might want to read my review: 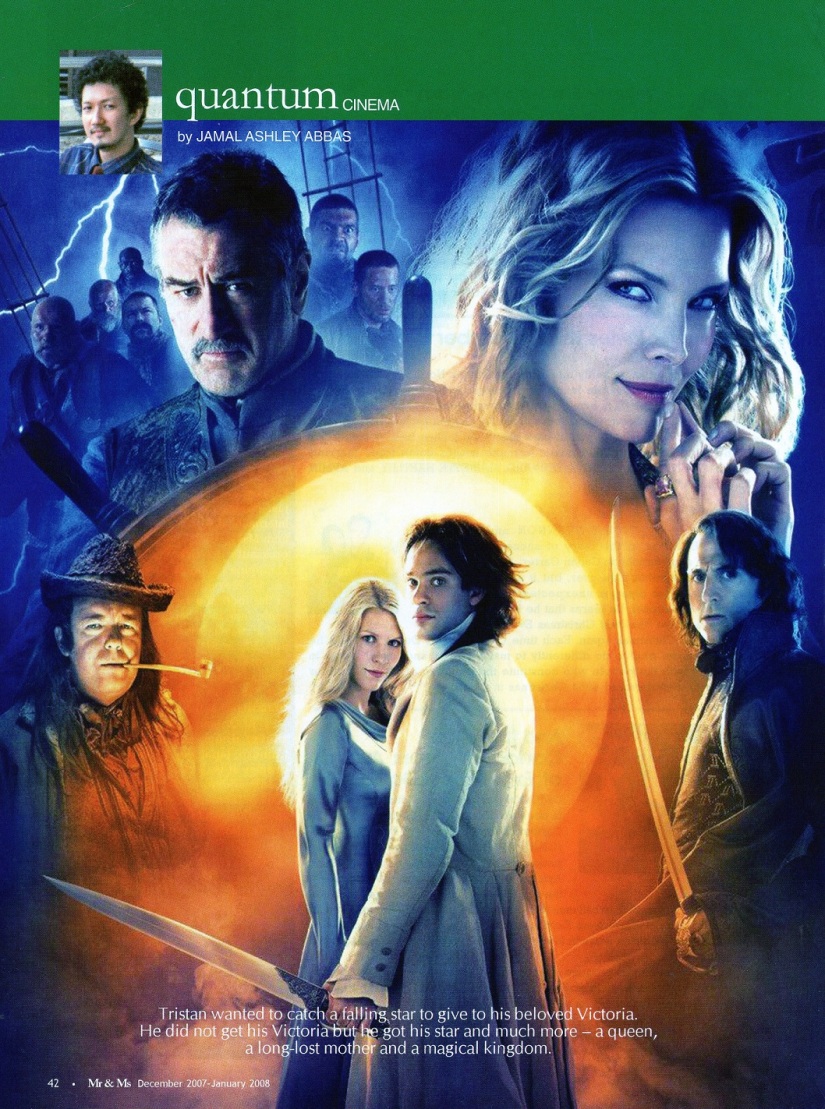 To Catch a Falling Star

In Matthew Vaughn’s film Stardust (2007), people don’t merely wish upon a star; they want to catch the star itself either as a gift to a loved one or to eat its heart out. The star has a heart because in the magical kingdom of Stormhold, fallen stars are actually in female human form. In this case, it is in the form of Yvaine (played by Claire Danes).

The story is set 150 years ago in a small village in England called The Wall. A low stone wall separates this remote human village from the magical kingdom of Stormhold peopled by Shakespearean-like characters including a pirate called Captain Shakespeare.

A century and a half ago, a young man named Dunstan Thorne (played by Ben Barnes) tricked the old guard of the wall and went though the portal. In the magical side of the wall, he met a beautiful maiden named Una (Kate Magowan) who gives him a charmed brooch in exchange for a kiss. She is a princess enslaved to a wicked witch. The kiss led on to a one-night stand.

For some unknown reasons, Dunstan, in spite of the magical charms of Stormhold, stayed there only for a night. Nine months later, a baby boy in a basket was delivered to him by the old guard of the wall. The boy was named Tristan.

Eighteen years later, Tristan grew up to be a handsome but uninspiring young man (Charlie Cox) hopelessly infatuated with the belle of the village, Victoria (Sienna Miller), who is soon to be engaged to a more sophisticated gentleman named Humphrey (Henry Cavill).

Meanwhile, across the wall, the Kingdom of Stormhold is about to lose its King (played by Peter O’Toole). He summons his four remaining sons and reminds them that he killed his many brothers in order to be King. He then asks his son Secundus (Rupert Everett) to go to the balcony and tell them what he sees. Another son, Septimus (Mark Strong) then pushes his brother to his death, which makes the old king happy.

Now, like King Lear, the Stormhold king has three children left. But unlike King Lear, he does not want to divide his kingdom. Before dying, he shows his sons his ruby necklace. The ruby then changes to diamond. He then declares that the diamond shall turn back into ruby in the hands of the rightful Stormhold king, who must be of the blood royal.

The necklace flings itself out of the window and onto the wide outer space until it hits a star. The star explodes and falls down to earth.

Tristan is out having an evening picnic with Victoria when they see the falling star. Tristan promises to cross the wall and get the star for her, as proof of his love. Victoria gives him one week to prove himself otherwise she shall accept Humphrey’s marriage proposal.

But others also saw the falling star and they want it for themselves. They are the Three Witches, older and meaner than Macbeth’s three old hags. Their leader is Lamia. To catch the star, she needs youth and strength, which they get by eating the heart of a star. She thus eats their last remaining morsel of star heart and is transformed into a very stunning Michelle Pfeiffer.  She then disrobes in front of the mirror and her sisters, who remain old and decrepit. Since this is a G-rated film, only her naked shoulders and legs were shown.  So why did she have to disrobe? Perhaps to titillate the young viewers?

The illustrated novella by Neil Gaiman (originally published by DC Comics) is reportedly “an adult fairy tale”. This G-rated movie is littered with sexual innuendoes and semi-nudity – the one night stand between Dunstan Thorne and Una, the bathing scenes of Yvaine and the King’s eldest son Primus (Jason Flemyng), who was killed in his bath and so appears naked (with a towel) as a ghost. And then there is the beautiful Lamia disrobing and of course, Tristan and Yvaine’s climactic night at the inn.

Moreover, gratuitous violence is everywhere. The King exhorts his sons to kill each other. Presumably, five of the sons died of fratricide while two were killed by the wicked witch Lamia. Lamia also killed Ditchwater Sal, the witch who enslaved Una.

Between the gratuitous killings and the sexual hints comes the comic relief — Captain Shakespeare (gamely played by Robert De Niro). The notorious and much feared pirate Captain Shakespeare goes beyond Capt. Jack Sparrow. While Sparrow sports long hair, wears eyeliners and has effeminate moves, Captain Shakespeare is a closet gay, whose closet is full of Broadway-ish costumes for women.

Captain Shakespeare is what you get when you let Capt. Jack Sparrow skipper Baron Münchhausen’s flying ship.

Capt. Shakespeare’s ship caught the falling star – in human form – and her male companion. It turns out that the notorious captain is not only a Broadway star wanna-be, but is also a superb dance, piano and fencing instructor. He taught Tristan how to fence. In a matter of a few days, the inept fencer became a master swordsman. The captain taught Yvaine how to play the piano and taught both of them how to dance the waltz. Yvaine, the star lady began to glow, as stars do.

THE STAR and OTHER STARS

Claire Danes is the star lady. Although Danes is an American, she spoke with a heavy British accent in the film. She should not have because Yvaine is not British, she is a STAR. It would have been better if she spoke in an accent dissimilar to the other characters.

The other non-British stars of the film, Robert de Niro and Michelle Pfeiffer, spoke with an American accent. This is all right because their characters live in the fantasy land of Stormhold — not in England — even if most of Stormhold’s residents also speak with a British accent.

Michelle Pfeiffer has the meatier villainess role. And she had the opportunity to show off her enduring beauty. The other beauty, Sienna Miller, has only a small supporting role.

Because of the role’s unexpected character, Robert De Niro gets the most nods from viewers and critics. It is very funny seeing the very macho De Niro cross-dressing. However, it seems like the actor was self-conscious about it.

The idea of a star falling on Earth and taking a female human form can be exciting. But the stories woven around it are trite, unoriginal and too many. Many of the characters are undeveloped and so many acting talents wasted – Sienna Miller, Ben Barnes, Nathaniel Parker, Rupert Everett, etc.

Tristan wanted to catch a falling star to give to his beloved Victoria. He did not get his Victoria but he got his star and much more – a queen, a long-lost mother and a magical kingdom.

Catching a star to inherit a kingdom and gain a lover might be too far-fetched for us lesser mortals. However, we can still follow the advice of Perry Como:

“ Catch a falling star an’ put it in your pocket /

For love may come and tap you on the shoulder,

An’ just in case you feel you wanta’ hold her,

You’ll have a pocketful of starlight!”