The Palestine – Israel issue is a global issue and is being debated in the United Nations and elsewhere even as of this moment. If you are a bit unclear about the issue, this movie, Paradise Now (2005), might give you some insights into the conflict, which started in 1948 upon the creation of the State of Israel.

I wrote this review for my QUANTUM CINEMA column in Mr. & Ms. Magazine, August 2006. 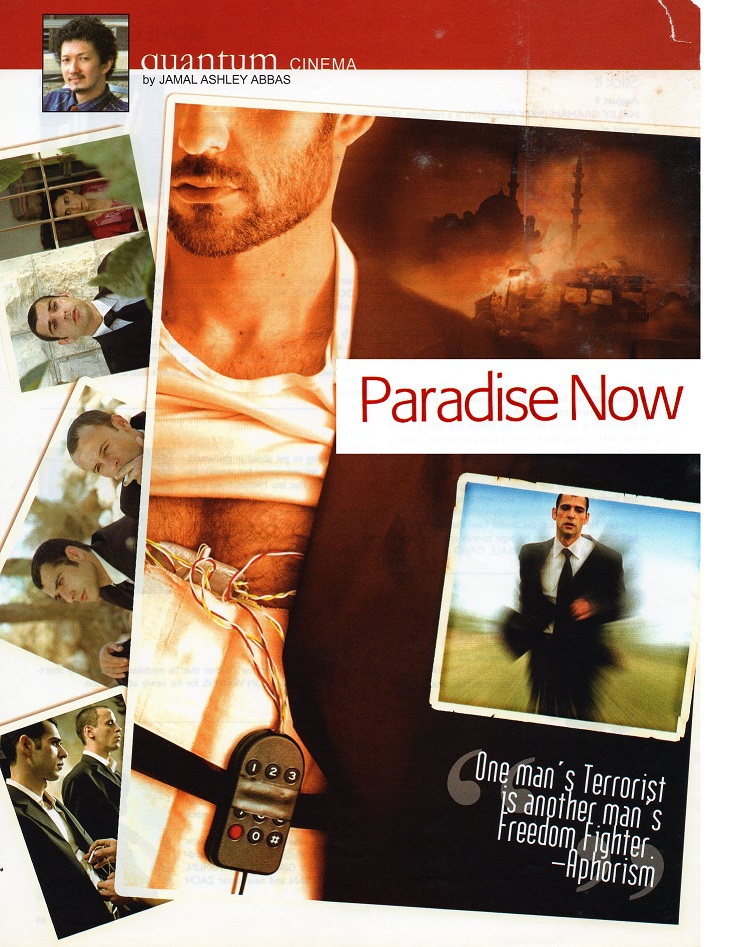 Top Israeli writer Irit Linor described Paradise Now as “an exciting, quality Nazi film.” (Ynet News 2/7/06). Yossi Zur, an Israeli whose son was a victim of suicide bombing, was widely quoted as saying, “What they call ‘Paradise Now’ we call ‘Hell Now’, each and every day.”

Yossi Zur and some 32,000 people petitioned the Academy Awards against the nomination of Paradise Now in the Best Foreign-Language Film category. “Free speech and artistic expression is sacred. But the Oscars should think twice about what it means to award such a movie a prize,” Zur said.

The Academy denied the Jewish petition and accepted the film’s nomination. But as Palestinian director / co-writer Hany Abu Assad predicted two days before the OSCAR ceremonies, Paradise Now did not win. Yossi Zur got his wish.

Interestingly, Amir Harel, an Israeli Jew, co-produced the controversial movie. Harel told reporters: “First and foremost the movie is a good work of art …If the movie raises awareness or presents a different side of reality, this is an important thing.”

The film Paradise Now attempts to show the whys and wherefores of suicide bombers – from their own point of view.

The opening scene shows a woman, with head and face uncovered, crossing an Israeli checkpoint. The woman engages the soldier in an eyeball-to-eyeball contact, without blinking. She crops up again in the third scene, interrupting a discussion among three men in a garage. She asks for her car. She engages the mechanic in casual talk and tells him that she likes old cars, especially one with such a name as Alfa Romeo.

The very first scenes of the movie already debunk many misconceptions about Muslim / Arab women. The character, Suha, is obviously a woman of the world and not a woman oppressed by her men folk. She is aggressive, travels alone, wears modern clothes without veils or headscarves and even drives her own car.

The film shows that suicide bombers are not brain-washed robots but ordinary people who have mothers, fathers, and siblings. They even fall in love.

The plot is simple. Two young men were chosen by a dominant militant group to go on a suicide bombing mission in the industrial city of Tel Aviv the following day.

A classic boy meets girl subplot provides the romantic angle. Like Romeo and Juliet, the protagonists come from different worlds. She is a rich, well-traveled woman whose father was a famous martyr. He is a simple mechanic, whose father was executed for collaborating with the enemy.

A twist in the plot provides the suspense and puts in the necessary ingredients that make the movie more credible because it highlights the moral and socio-political complexities of Palestinian reality. It is a stroke of genius which makes the film a great suspense thriller. Revealing the twist here would spoil the reader’s viewing pleasure.

In Reporting the Arab-Israeli Conflict (1997 London: Routledge), Tamar Liebes explained the various framing mechanisms that the Media use in covering the Middle East conflict. One such mechanism is called Equalizing where both parties are made to appear as if they are equal in power.

Many people do not realize that Israel is a technologically advanced country with a sophisticated army and air force. It is a satellite state of the US. On the other hand, the Palestinians had lost their country and have nothing except their Cause. Their weapons consist of sticks and stones and some long arms and explosives.

As the character Khaled noted in the movie, if the Palestinians had an air force, there would be no need for martyrs or suicide bombers.

The difference between the Israelis and the Palestinians is reflected in the contrast between the Palestinian town of Nablus and the Israeli industrial capital, Tel Aviv. The film’s setting was in Nablus for almost the whole length of the movie. Nablus looks like a town in a less developed country, with concrete and mud houses and dirt roads. In the last scenes of the movie, the viewers get to see Tel Aviv, a modern city with skyscrapers, wide highways, and the ambience of a developed country.

The film belies the idea that just because a territory is proclaimed a nation-state, the inhabitants immediately become citizens of that newly created country. In the land known as Palestine, the nation-state of Israel was proclaimed in 1948. Thus, overnight, the Muslims and Christians in Palestine became Israeli citizens. But the film Paradise Now makes it clear that Muslims, who insist on calling themselves Palestinians, could never hope to be given equal opportunity in the Jewish state of Israel

In the movie, Said, one of the two designated suicide bombers, gives the following rationale for his actions:

“When a people find themselves alone before the oppressor, no other remedy remains but to stop the injustice… They (the Israelis) have convinced the world and themselves that they are the victims. Is it possible to be an oppressor and a victim at the same time? And if they had awarded themselves the roles of Oppressor and Victim, the only remedy left (for the Palestinians) is to be both a Victim and a Killer.”

Throughout history, when the contending parties are not equal in power, the weaker party opts for martyrdom. In the first centuries of Christianity, thousands upon thousands of Christians opted for martyrdom rather than renounce their faith. In the waning years of the Pacific War, the Japanese fighter pilots crashed their explosives-laden airplanes in enemy ships. They were known as the kamikaze or suicide pilots.

In the late 19th and early 20th century, the warriors of the Sultanate of Sulu took it upon themselves to fight the invaders (Spaniards and Americans) since the Sultan could not defend Sulu anymore. With the blessings of the datus, the suicide warriors, known as juramentados to the foreigners or parang sabil to the locals, would announce their intention to be martyrs. The panditas (religious men) would wash and pray over the parang sabils – the equivalent of the Christians’ last rites.  At the appointed time, the suicide warriors (individually or in groups) would charge at the enemies with their kris (swords) until they themselves were killed. The stories of these suicide warriors would live on in songs or poetry. Their enemies called them amoks as in running amok and derided them in their writings.

The Palestinian suicide bomber is the modern-day version of the parang sabil. As shown in the movie, the designated bombers were shaved and washed and prayed over (and thus ready for burial). Instead of songs and poetry, the martyrs leave behind posters and video productions of themselves. Their enemies call them terrorists.

The tagline of the film is: “From the most unexpected place, comes a bold new call for peace.”  For the first time, non-Muslim viewers get to see how Palestinians, including the suicide bombers, truly live and think.

Actually, the film is already a sanitized version of reality. During filming, an Israeli helicopter gunship fired missiles at a nearby car. Some of the foreign crew were so scared that they left the country. Also, a land mine exploded 300 meters from the set.

In the DVD edition, bonus materials showed a day when the Israeli military closed the town of Nablus when they arrested some Palestinians. Footage also shows Israeli armored vehicles firing shots at Palestinians while the Palestinians threw rocks and concrete slabs in return. These happened during the filming of Paradise Now.

In the film, there were no violent scenes at all. Nevertheless, Paradise Now might encourage others to produce more films that would tell the world the truth about the Palestine situation. After all, “the truth will set you free.”