Today, I joined the petition to stop the Philippine government from allowing the re- 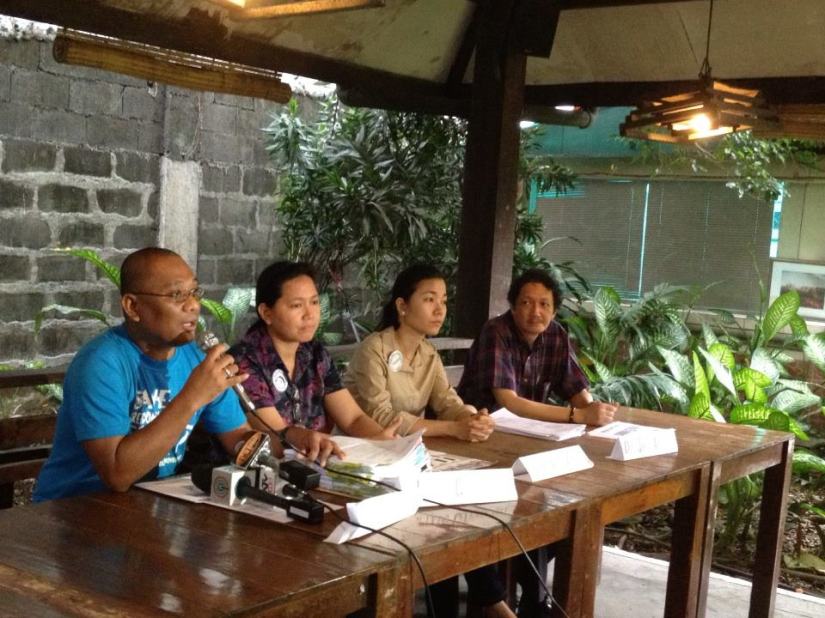 export of 23 Solomon Island dolphins to Singapore to be used as show animals in Resorts World at Sentosa, Singapore. The move was spearheaded by Earth Island Institute Philippines (EII-Phils), together with Philippine Animal Welfare Society (PAWS), Compassion and Responsibility to Animals (CARA), Welfare Philippines, Dolphins Love Freedom Network, Save Philippine Seas, Save Freedom Island Movement, Wild Bird Club of the Philippines and other individuals.

We filed the petition at the Quezon City Regional Trial Court, praying for an immediate Temporary Environment Protection Order (TEPO). It appears that the Ocean Adventure Park in Subic, where the dolphins are kept and the Resorts World in Singapore,

where they will go, are again trying to re-export these dolphins to Singapore in contravention of Philippine laws and international agreements.

In November of last year, animal protection advocates from Manila and Singapore launched the “Save the World’s Saddest Dolphins”   campaign in Taguig City, Philippines to stop the Philippine authorities from allowing the 23 dolphins to be re-exported to Singapore.  (See post)

The first batch of dolphins imported to the Philippines from the Solomon Islands arrived on Dec. 8, 2008. They were to be trained at the Ocean Adventure Park in Subic, Zambales and later re-exported to Resorts World in Sentosa, Singapore.

Despite vigorous protests by environmental and animal rights/welfare advocates, and the findings of the International Union for the Conservation of Nature and Natural Resources (IUCN),  eleven (11) more dolphins were caught in the Solomon Islands and sent to  the Ocean Adventure Park in Subic. The dolphins arrived on 15 January 2009.

Despite all the protests, the Philippine government allowed five (5) more Solomon Island dolphins to come to Subic from Langkawi, Malaysia in January 2011. A total of 23 dolphins now stay at the Subic Ocean Adventure Park. Two dolphins died in Malaysia before it could be transported to Manila. Had they not died, there would have been 25 dolphins now in Subic.

The Wildlife Resources Conservation and Protection Act of the Philippines (RA 9147) recognizes certain institutions as “Scientific Authorities” who can render opinions on questions regarding CITES ( Convention on International Trade in Endangered Species of Wild Fauna and Flora) , an international agreement of which the Philippines has been a party to since 1981. The law names Siliman University and the National Museum as Scientific Authorities.

In 2009, , Silliman University, through its President, Ben S. Malayang III wrote a letter addressed to then BFAR Director Malcolm I. Sarmiento, in which he stated:

“We have read the relevant documents, including the case study report of the just released IUCN Samoa workshop. It is abundantly clear that the Philippines has been derelict in its obligations under CITES; the importation should not have been allowed. The Non-Detrimental Finding (NDF) is not credible.

As the designated scientific authority under the joint DENR-DA-PCSD Administrative Order No. 1, we recommend a moratorium on importations of live T. aduncus into the Philippines to take effect immediately and be lifted only until such time that the adequate population assessment necessary to a credible NDF has been carried out.” (emphasis added)

Also in 2009, the National Museum, through its Director Corazon S. Alvina, commented on the importation of Solomon Island dolphins as follows:

“Based on the facts gathered and presented by Earth Island, if truth really prevails, the National Museum, being a scientific institution and an active member of Convention on the International Trade on Endangered Species (CITES) firmly opposes this illicit activity. This must not be tolerated. Numerous negative consequences such as the spread of diseases possibly carried by these dolphins and threat to the survival of the species may occur.  (emphasis added)

Thus, it is respectfully recommended that any activities regarding the importation of wildlife species be acted upon in accordance with both the Philippine Law (RA 9147) and CITES.”

On October 4, 2012, Earth Island Institute Philippines received a fax copy of a letter-order from the BFAR (Bureau of Fisheries and Aquaric Resources) asking it to comment on an application for re-export of the dolphins in seven (7) days from receipt.

And so, I joined Trixie Concepcion, Regional Director for Asia of the Earth Island Institute and other groups and individuals in petitioning the Regional Trial Court  to:

1. Issue a Temporary Environment Protection Order (TEPO) ordering the respondents to refrain from re-exporting the captive dolphins and to any additional imports of dolphins into the country;

2. Direct respondents to permanently cease and desist from importing dolphins into the country and re-exporting those already in captivity in the Philippines.

3. Order the respondents to hold in custody the dolphins currently in Ocean Adventure until they are rehabilitated for release back into the wild and to eventually facilitate their release and return back into their native waters of the Solomon Islands.

4. Declare as null and void its Import Permit and

5.  Direct the respondents to make periodic reports on the execution of the Court’s final decision on release of said dolphins.

We filed the petition before lunch and after an hour or so, Acting Executive Judge Bernelto Fernandez issued a 72-hour Temporary Environment Protection Order (TEPO).

We hope that all our other prayers will also prosper.