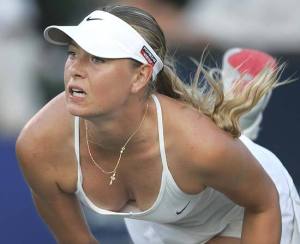 Maria played top-notch tennis, the way she was playing all throughout the tournament. In her victory speech, she mentioned that Billie Jean King sent her a message today that says “champions take chances and pressure is a privilege.” Well, she played an aggressive game, taking chances and putting pressure on the opponent.

The experience of Maria showed quite clearly as she was more poised and focused than Ana. Both are 20-year olds.

Because she reached the Aussie Open final, Ivanovic is now ranked world’s Number 2. But with Maria’s showing in this tournament, she is clearly the “real” Number 2.

At any rate, Justine Henin needs to practice more as Maria is back!