Below is a report I made for Vera Files.

It is published at Yahoo(click) and at Vera Files (click) 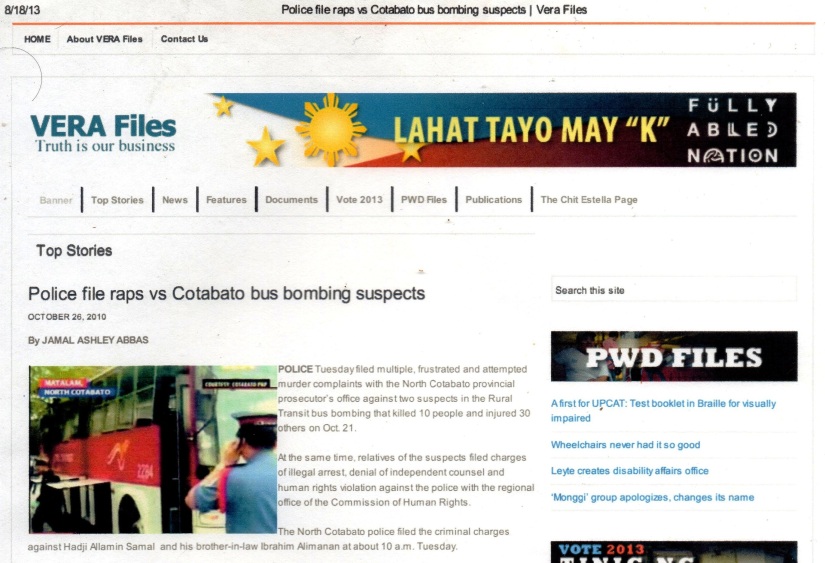 Police today filed multiple, frustrated and attempted murder complaints with the North Cotabato provincial prosecutor’s office against two suspects in the Rural Transit bus bombing that killed 10 persons and injured 30 others on Oct. 21.

At the same time, relatives of the suspects filed charges of illegal arrest, denial of independent counsel and human rights violation against the police with the regional office of the Commission of Human Rights (CHR).

The North Cotabato police filed the criminal charges against Hadji Allamin Samal and his brother-in-law Ibrahim Alimanan at about 10 a.m. today.

Samal and Alimanan were among four persons arrested by the police on Oct.23 after a 15-year-old boy, Pigko Tnagkulo, admitted having planted the bomb inside the bus on orders of the suspects.

Regional Director Jack Malinao of the Criminal Investigation and Detection Group (CIDG) in the Autonomous Region of Muslim Mindanao (ARMM) said the two other suspects,Yasser Talusob and his brother Abdul Alim, were released because Tnagkulo claimed only the two (Samal and Alimanan) were with him at the time of the incident.

Col. Alex Tagum, head of Task Force Rural Transit Bus investigating the bombing incident, clarified yesterday the Talusob brothers had not been arrested as earlier reported by a military official.

“They willingly came along with us,” Tagum told Vera Files. “They just accompanied the two arrested men (Samal and Alimanan) who were their neighbours.”

Human Rights lawyer Zainudin S. Malang, executive director of the Mindanao Human Rights Action Center, Inc. (MinHRAC), insisted that the Talusob brothers were arrested with the other two but were forced to sign a document saying they came to the detention center voluntarily.

“You don’t handcuff and blindfold people you are not arresting,” he observed as in the case of the Talusob brothers.

Malang further noted that the boy identified the alleged perpetrator as Ulama, which, he said, “is so different from Talusob, Samal and Alimanan.”

Calasuma Alimanan, mother of Alimanan and mother-in-law of Samal, recounted that a joint team of military and police officers armed with high-powered guns raided their house after lunch last Saturday, Oct. 23. They handcuffed Ibrahim and Allamin despite her protests.

“I kept on asking for their arrest warrant (because) I wanted to know if their names (Samal and Alimanan) are really there,” she said. “There was no arrest warrant.”
Relatives of the suspects, human rights advocates, lawyers and a medical doctor who tried to visit the suspects were denied access.

According to the testimonies of the suspects’ relatives, Samal was with Administrator Mahendra Majilon of the Cooperative Development Authority-Autonomous Region in Muslim Mindanao (CDA-ARMM) at the time of the bombing while his brother-in-law Alimanan was at his office at the National Labor Relations Commission (NLRC).

Samal has been an escort of Majilon since Oct 18 on the request of Purok leader Datu Ibrahim Maglangit while Alimanan works as an assistant of one of the NLRC lawyers.

Yasser Talusob, an electrician, was reportedly out campaigning for his uncle Sabas Bansil who was running for Kagawad when the incident happened. His younger brother Abdul Alim was at home as he has been sick since Monday of that week, their relatives added.

(VERA Files is put out by veteran journalists taking a deeper look at current issues. Vera is Latin for “true.”)