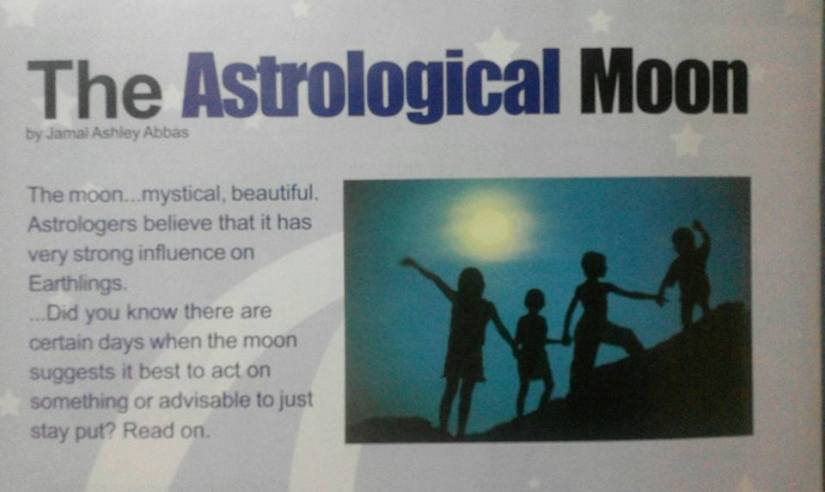 Most people are familiar with Sun-Sign astrology. When a person says s/he is a Sagittarian, it means that when s/he was born, the Sun was in (under the influence of) the constellation Sagittarius. There is, however, another very important planetary body in our solar system – the Moon, Earth’s closest neighbor.

The Moon’s influence on the tides, on the migratory paths of birds, and on animal and human behavior is very well documented. Astrologers consider the position of the Moon at one’s birth just as important as the Sun’s position. Some people consider Moon-Sign astrology as a better gauge of the character of a person.

An astrological chart is a snapshot of the cosmos at any given time and place. From the chart, one can see the angular relationships of the various heavenly bodies. For example, if Mars and Saturn are separated by zero to 8 degrees, they are said to be in conjunction. Physically, this means that from the vantage point of the Earth, both planets appear to be close together. The combined gravitational and other effects of these planets will certainly affect the Earth and its inhabitants in some ways. By looking at a chart, the astrologer can say how these planets will affect the person concerned. If two planets are separated by 180 degrees, they are said to be in opposition. Physically, this means that both planets are in opposite sides of the earth. Thus, the Earth and its beings are affected by two planetary forces in opposite directions. These angular relationships are called Aspects.

Astrologers believe that the Moon has very strong influence on Earthlings. As the fastest moving planetary body, the Moon is of utmost importance in Electional Astrology. Electional astrology is the approach used by astrologers to determine the most opportune time for endeavors or actions.

For predicting outcomes, the astrologer creates the progression chart for a future event. For example, if one wants to know who will win in the next Pacquiao fight, the astrologer looks at the chart of the specific date of the fight, and will study the characteristics of the planetary bodies, especially the Moon.

If somebody wants to ask a specific question, the astrologer builds the chart for the very moment the question is being asked. This is called horary astrology. In horary, predictive and electional astrology, the Moon’s characteristics – i.e., its House position, phase, aspects and Sign, are of utmost importance.

From ancient times, astrologers noticed that as the it passes from one Zodiac sign to another, there is a period when the Moon is “aspect-less”; i.e., it has no aspects with other planets. The astrologers have observed that this aspect-less period of the moon is quite inauspicious for Earthlings.

Every two and half days, the Moon does not make any aspects to any planet while moving from one sign and entering another. This period can range from a few minutes to a couple of days. When this happens, the Moon is said to be void-of-course.

If a person wants to know how an event or project will turn out, the astrologer would cast a chart and study the sign and aspects of the Moon. If the Moon has no aspects, then the project or event would have practically no outcome; i.e., it would come to nothing.

When the moon is void-of course, astrologers suggest that no important business should be planned or initiated. Even sending important e-mails or registered mails or faxes or making important calls are not advised. Most, if not all, actions started and / or made during the void-of-course moon would come to naught.

During this period, it is common for people to have many seemingly great ideas which would later turn out to be quite mediocre. For first time endeavors such as a first date or a job interview, it is advised not to do them on a Void-of Course Moon. As for weddings, unless you want the marriage to be annulled at a later date, better do it on another day.

An aspect-less Moon is a good time to meditate, pray or study. The Mind goes inward during the void-of-course Moon. During this period, one usually feels relaxed, detached or even “spaced out”. Listening to Mind-Programming tapes or classical music, reading literature, watching movies, cleaning up the house or the car are just some of the things that one should do during the Void-of-Course Moon.

Sometimes the blame for unsuccessful undertakings lies not in us humans, but in the stars; or, in this case, the Moon.

December 2005 starts with a dynamic New Moon in Sagittarius. For those who want to start a project or a business, do it during a New Moon. The Moon makes a T-square with Mars and Jupiter on December 6. T-squares are difficult aspects, thus it would be better to simply relax on this day. Better make it a one and a half-day holiday as the Moon is void up to the 7th at 1:45 pm. The Full Moon is on the 16th but start your day after lunch when the Moon is no longer void-of-course. The week-end of December 17-18 should be a time for relaxation and recreation. The Moon is void-of-course for the weekend but on the 17th, the Moon forms a Grand Trine with Uranus and Jupiter. A grand trine aspect usually signifies a grand time. This may be the perfect time to bring the office staff on an outdoor trip or the family to a Christmas week-end out-of-town. 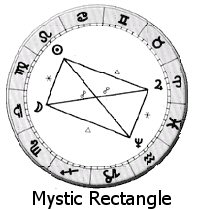 A “Mystic Rectangle” aspect oversees the Winter Solstice on the 22nd. Winter solstice is a time of celebration for most ancient and traditional cultures of the Northern hemisphere. The Mystic Rectangle aspect promotes the best use of one’s potentials. If you have an important date for December, do it on this day. A post-Christmas rest would best be done from the afternoon of the 27th up to the following day, or you can simply ride out the Void-of-course Moon. This month not only begins with a New Moon but ends with it as well. New Year’s Eve celebration will therefore be done during the New Moon, which is quite auspicious for the coming year. 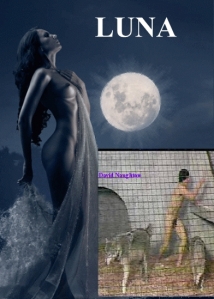