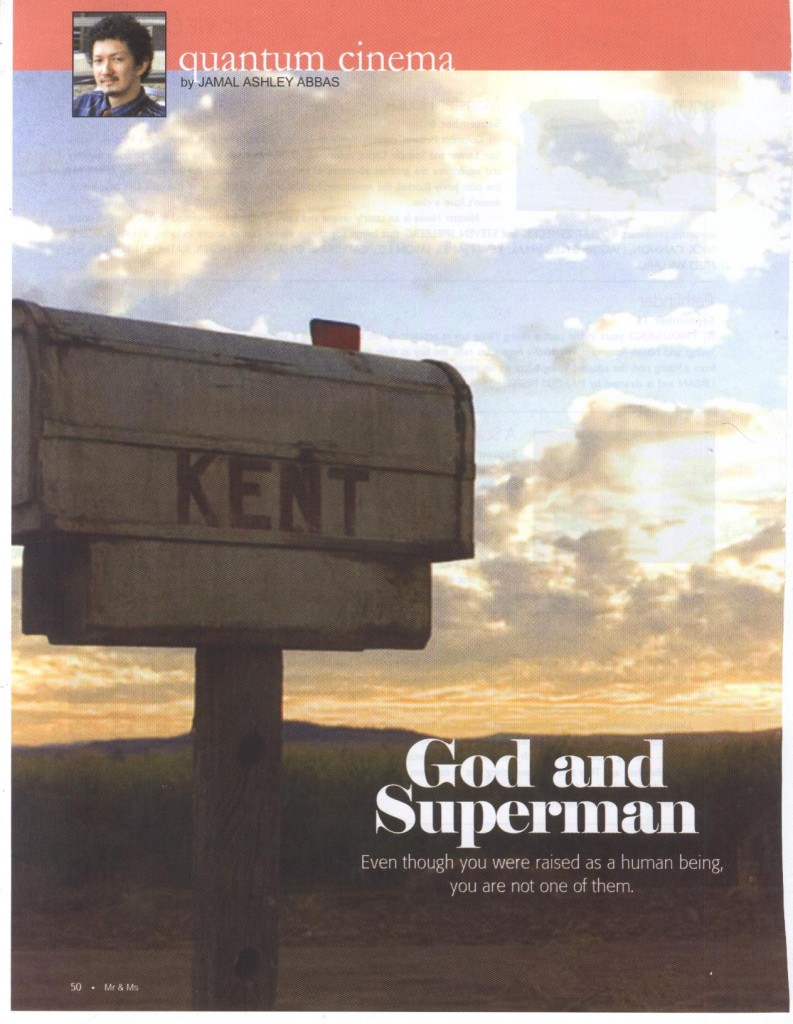 The opening scene of Superman Returns (2006) shows cosmic images of a collapsing star which then gives birth to a new world. The voice-over, with a grandiose John Williams score, says: “You will make my strength your own. You will see my life through your eyes as your life will be seen through mine. The Son becomes the Father; the Father, the Son.”

Then the villain of the story is introduced. In her deathbed, an old wrinkled lady signs away all her riches to a devil of a man, who was presumably her lover although much younger than her. In contrast, the hero is shown in a loving relationship with his aging mother – a veritable Madonna and Son.

A few scenes later, the villain called Lex is told by his sidekick / lover that he is not a god. Lex replies, “Gods are selfish beings who fly around in little red capes and don’t share their power with mankind.” Lex maintains that like Prometheus, he “just wants to bring fire to the people.” The Promethean fire is analogous to the Apple of the Tree of Knowledge of Good and Evil.

When not flying in a little red cape, Kal-El the hero lives incognito among the people. He is known for being meek and mild mannered.

Meanwhile, the devilish Lex stole the “fire from the gods” or more precisely, crystals from Kal-El’s fortress. Lex uses the crystals to create havoc in the city. And so the hero flies again to save lives.

The Son as the Savior

After a hard day’s work, the hero flies and ponders upon the words of his Father: “Even though you were raised as a human being, you are not one of them. They can be a great people, Kal-El. They wish to be. They only lack the Light to show the Way. I have sent them You, My only Son.”

Kal-El (which in Hebrew could mean “Voice of God”) is then shown gliding in slow motion. He hovers above the Earth and listens to the cries of humanity. Later, he is shown saving people from all sorts of danger all over the world, including Manila.

Several scenes later, he is with the woman he loves. Together they ascend high over the Earth. He tells her, “You wrote that the world doesn’t need a Savior, but everyday I hear people cry for one.”

The Passion of the Son

The diabolical Lex creates even greater havoc with his stolen crystals. Kal-El confronts him. But Kal-El is overpowered, kicked and beaten by Lex and his goons. And then, his flesh was pierced, not by a spear but by a sharp piece of green stone. He falls into the abyss but somehow is saved by the woman he loves.

Kal-El goes back to the Villain and defeats him. But greatly weakened, he plunges down to Earth with arms outstretched like Jesus Christ on the Cross. Solemn hymnal music plays as he falls to his death.

A day or so later, a nurse found Kal-El’s hospital death-bed empty.

In the final scene, he appears to the woman he loves. She asks, “Will we see you ….around?” He answers, “I’m always around.” Then he ascends to the heavens above.

And that is the story of Kal-El, more popularly known as Superman as re-told by Bryan Singer in Superman Returns (2006).

The obvious Christian framework of Singer’s Superman proves that the comic book character has come a long way since it was created by Canadian artist Joe Shuster and American writer Jerry Siegel in 1932. Both were Jews.

Shuster and Siegel created the most popular superhero and icon of pop culture. But the duo hardly made any money out of it. They sold the rights to DC Comics for the sum of one hundred thirty dollars ($ 130 – ) in 1939.

Because of the financial success of Superman the Movie (1978), Warner Brothers gave the aging artists a pension of $ 35,000 a year and medical care benefits plus the recognition they deserved. All media products of Superman must be credited as “Superman created by Jerry Siegel and Joe Shuster.”

For those old enough to have watched Superman The Movie (1978), watching Superman Returns would give them déjà vu experience. Singer obviously wanted to have continuity with Richard Donner’s 1978 film. The opening credits style was maintained as well as John William’s magnificent score. The late great Marlon Brando was revived, thanks to the magic of computer graphics. And even more astonishing, Christopher Reeve was back on screen through actor Brandon Routh. Even the sinister plot of Lex Luthor remains the same – to create history’s greatest Real Estate swindle.

Many people consider Superman the Movie (and its sequel) as the best superhero film(s) ever made. Perhaps that is why Singer, director of X-Men 1 and 2, pays homage to Donner’s film in this year’s version. Unfortunately, Singer’s version falls quite behind the original.

In the 1970s, the producers were afraid that people would not come in droves to watch a comic book hero. To pull the audience to the theaters, the producers of the original Superman movie paid big money to get then superstars Marlon Brando and Gene Hackman (OSCAR winners for the Godfather and the French Connection respectively). For supporting roles, they got Ned Beatty, Jackie Cooper, Glenn Ford, Trevor Howard, Margot Kidder, Jack O’Halloran, Valerie Perrine, Maria Schell, Terence Stamp, Phyllis Thaxter and Susannah York. And to play Superman, they discovered a young man named Christopher Reeve.

After the-Godfather, Brando did not care for movies anymore. He just accepted the million dollar fees. But Hackman was still in his prime and made a quite loveable Lex Luthor. Valerie Perrine was at her peak and was oozing with sex appeal as Eve, Luthor’s sidekick and mistress. Ned Beatty was funny. Glenn Ford and Jackie Cooper were there for nostalgia.

Kevin Spacey is a very good actor. But unlike in the 1978 movie where the funny antics of Luthor and company blended well with the entire story, the 2006 version should have no place for such campy style. Singer’s Superman is simply too serious. What is needed is an equally serious adversary.

Eva Marie Saint provided the nostalgia. One critic wrote that he went to see the film just to see Eva Marie Saint and Marlon Brando together in one film – their first since On the Waterfront.

The best parts of the movie were the special effects. The airplane sequence can be compared to the best airplane disaster movies. The boat sequence can give the Titanic a run for its money. The various escapades of Superman were digitally perfect.

Comic book heroes should be fun. Comic pertains to comedy or something fun or funny. The Batman TV series was fun but the movie series became a psychological treatise. The X-Men series became a metaphor for racism. The Superman comics, TV series and movies were fun. Not anymore.

The Second Coming of Superman has turned him into a ponderous, almost humorless creature. After all, it is not easy to be the world’s Savior.

If the sequel of Superman Returns maintains its framework, one could expect the following story-line for the next Superman movie:

Superman is gone. He has ascended to the heavens. Lois Lane tells her colleagues at the Daily Planet (and later, the world) that she saw Superman after he rose from his coma and that Superman said, “I will always be around.”

Lest the people forget him, the Daily Planet led by Lois Lane, Jimmy Olsen and the Whites write epistles, articles and “the Good News” about Superman. Soon, religions are formed with Superman / Kal-El as the Deity-Son and Jor-El as the Deity – Father. Martha Kent is revered as the saintly earthly Mother.

The Passion (Suffering) of Superman under the hands of Lex Luthor and his gang are re-enacted yearly to commemorate Kal-El’s pathos. The week-long celebration ends with the celebration of His Resurrection and Ascension to Outer Space.

Orders of Knight Protectors are formed to hide the real identity of Lois Lane’s son and his descendants.

Generations later, a writer publishes a best-selling book called Michelangelo’s Code which claims that Kal-El and Lois Lane had a son and that a secret society is hiding the identity of Kal-El’s descendants.

That would be an interesting storyline for the next Superman movie. It would be much better than what one critic suggests. He says that Singer should go back directing the next X-Men movie with Superman re-building the Golden Gate Bridge destroyed by Magneto.