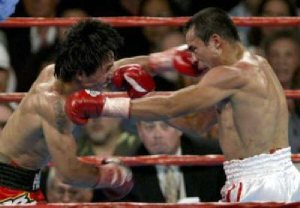 Filipino fighter Manny Pacquiao has been dreaming of the super featherweight crown for more than four years. In 2004, even though he floored Juan Manuel Marquez three times in the first round, the fight was declared a draw.

For some reasons, he got to fight the world’s best boxers, Marco Antonio Barreira and Erik Morales when these guys just happened to have lost their championship belts.

Finally, Marquez, the WBC super featherweight champion decided to finally give Pacquiao a rematch after 4 years.

Not many people gave Marquez a chance. But he came well-prepared. And he almost took the match.

Pacquiao was very tentative and quite slow. Perhaps it is the effect of going into the ring so many pounds higher than the weight limit.

The fantastic hand speed of Pacquiao was not seen often. And he seemed to be afraid of mixing it up. It was a very different Pacquiao out there. There didn’t seem to be any fire in him. Is he near the end of the road?

Perhaps he was distracted by all the instructions his corner had been shouting the whole duration of the match. It was irritating for me. A fighter could not fight and listen to instructions at the same time.

A good combination of punches floored Marquez in the third round. Pacquiao followed it up with a flurry of punches. Marquez was in a daze but survived.

In the fourth round, the old Pacquiao would have gone straight and mixed it up with the opponent come what may. But this new Pacquiao was tentative. And so Marquez recovered.

Fortunately, Pacquiao got a second wind in the 10th round and staggered Marquez.

Pacquiao was lucky to have won a Split Decision. He fought a much better fight in their first match yet he just got a draw there.

I thought the judges would give the match to Marquez because he was the champion. Champions are usually given additional credits or benefit of the doubt. But then, Pacquiao was at least a 2-1 favorite. A lot more people in the gambling town of Las Vegas would be mad had Marquez won.

Pacquiao’s handlers seemed to be training him to fight in a higher division by making him fight a lot heavier than he should. They should not have not made the Marquez fight a trial run for Pacquiao’s future fights in the higher division. Pacquiao almost lost this fight.

And by the way Pacquiao fought, it seems that it would be better for him to remain in the super featherweight category.

I now realize that a boxer’s coach and / or trainer can actually cause the boxer’s defeat. In this case, the advice and training given to Pacaquiao almost cost him the fight.

If Foreman or Tyson would be told to think of defense first, they would not last long, especially if they would be fighting intelligent boxers.

Marquez is one of the most intelligent boxers today. He knows how to maintain a strategy and change tactics. He is a fast thinker. The way to fight him is to attack him like a bulldozer just like what Pacquiao did in their first match.

From an attacking power-puncher, they wanted Pacquiao to counter-punch a counter-puncher. This is the silliest thing I have ever heard.

Add to this the fact that they made Pacquiao come into the ring ten pounds or so heavier than the weight limit, then it is truly remarkable that Pacquiao was still able to eke out a win.

The extra weight seemed to have made him slow-footed and heavy-handed, especially since he was ordered to counter-punch instead of simply attacking.

At any rate, congratulations to the Pac-Man. In spite of the wrong advice and training he was given, he still managed to win. He has now beaten three of the world’s best boxers, pound-for-pound . He is the first Asian to have won 3 world boxing titles.

Whatever reasons his handlers had in giving Pacquiao the wrong training, I hope they now realize their folly. I hope they won’t do it again.